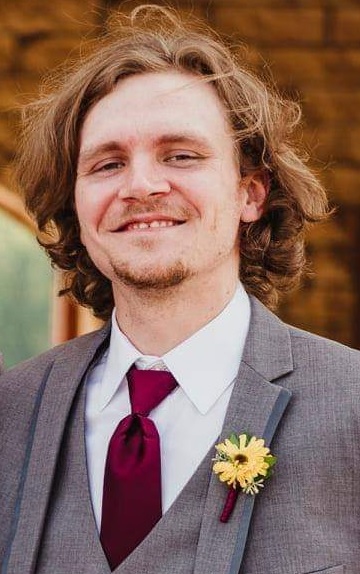 What is your name and how long have you been in your current position?

My name is Daniel Irish, I have been part of the University Housing team for a little over two years as of now.

What is your current role in University Housing?

I am a Facilities Repair Worker. In a general sense that means I’m part of the team that maintains the residence and dining halls.

How long have you been with University Housing? Other positions on campus?

I started in December of 2018 with 3rd shift Housing. This is the first position I have held in the UW system.

What do you do on a typical day in your job?

Most days involve routine maintenance tasks like auto scrubbing the terazzo floors of residence and dining hall ground levels, carpet cleaning and spot removal, and the delivery of COVID-19 sanitization products all over campus. But every day there is something new to do as we are the after-hours response team. I do anything and everything from serious events like responding to stuck elevators, smoke alarm triggered building evacuations and transporting COVID-positive students to isolation housing, to simple things like helping students into dens and computer labs to retrieve things they left behind before doors were locked.

What’s your favorite thing about working with students who are living on campus?

As someone who has worked plenty of years in customer service, it was definitely strange to have such positive responses with every interaction I have with students. It must be the time of night when we go to help because it’s always plenty of thanks and smiles.

What is a past work accomplishment that you’re proud of?

In the summer of 2019, our team was able to re-finish the floors at Elizabeth Waters residence hall and save the UW tens of thousands of dollars having the project done in-house rather than hiring outside workers. The task was certainly daunting at first, but after everything was completed, it was huge to see how great of a job we did and the skills I learned there are definitely going to come in handy down the line.

What is a secret talent that your co-workers may not know about?

Many of my co-workers know I’m a bit of a Legend of Zelda fanatic, but many of them would be surprised to learn I actually have a homemade replica “Tunic” that I wear most years of Halloween. I even own 4 different Ocarina’s, one of the instruments from the games. I play a Four, Six, and Eight hole single octave Ocarina, and my newest super intimidating Sixteen double octave Ocarina I picked up just a few months ago. I also play the melodica casually and piano on more rare occasions.

Where did you grow up?

I grew up in the Token Creek neighborhoods and attended school in DeForest, WI, though some of my favorite memories growing up were with my dad’s side of the family in Bagley, Wisconsin, a small town to the west just along the Mississippi River.

Where is your favorite place in the world?

That’s a hard one, I feel like I have to pick a few. My favorite place in Madison is a little tree along the shoreline of Tenney Park where you can climb up and sit over the edge of the shoreline. In Wisconsin, I would have to say Devil’s Lake. I have countless memories as a kid, and now as many as an adult. In the U.S., I would have to say Horning’s Hideout, a little campground in North Plains, Oregon. It’s too far away to say my favorite place in the world because I don’t get to visit as much as I’d like, but there is something magical about walking through the woods with ferns that nearly tower over you.

What is your favorite TV show, movie, or book?

My current favorite shows are Black Mirror, Amazon’s Upload, Philip K Dick’s Electronic Dreams, and Queen’s Gambit. My favorite film of all time is a close tie between Across the Universe and Eternal Sunshine of the Spotless Mind. After finishing the Song of Ice and Fire (the Game of Thrones book series), I’ve started to get into Neil Gaiman’s writing. I’m currently on Neverwhere, but enjoyed Good Omens and American Gods. I also enjoy Graham Hancock’s Fingerprints of the Gods, Siddhartha by Hermann Hesse, and Be Here Now by Ram Dass.

What is your favorite family/home tradition?

In terms of family traditions there is nothing too special to note other than trying to make it out to every solstice bonfire at the Olbrich Neighborhood Park on Atwood Blvd. I guess I could say going out onto the Mississippi River to watch meteor showers would be something I’ve done since a kid as well.

If you would like to see one of your coworkers featured in a future issue, email marketing@housing.wisc.edu with your coworker’s name and their supervisor’s name.