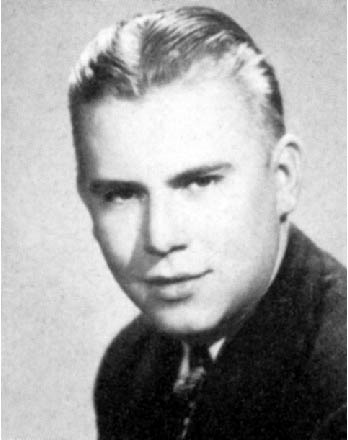 Orville Luedke, of Milwaukee, lived in the Residence Halls for four years. A journalism major, he worked part of his way through school as a waiter in the Van Hise dining rooms. In his first year, Orv was in the University Band and on the Freshman Tennis Squad. He worked on the Daily Cardinal his second year. As a junior he was president of the Gregory House, a member of the Hall’s Cabinet, and on the University House Presidents’ Council. He was a moving force at this time in stimulating the latent interests of halls men in campus activities. As a senior, Orv was halls editor of the Daily Cardinal and Public Relations Chairman for his house. He was a member of Sigma Nu Fraternity and Sigma Delta Chi, professional journalism fraternity. An energetic organizer with a winning personality, Orv did much towards bringing to the campus an understanding of the activities and aims of the Residence Halls. Orville Luedke was killed in 1943 while engaged in military maneuvers at Wendover Field.