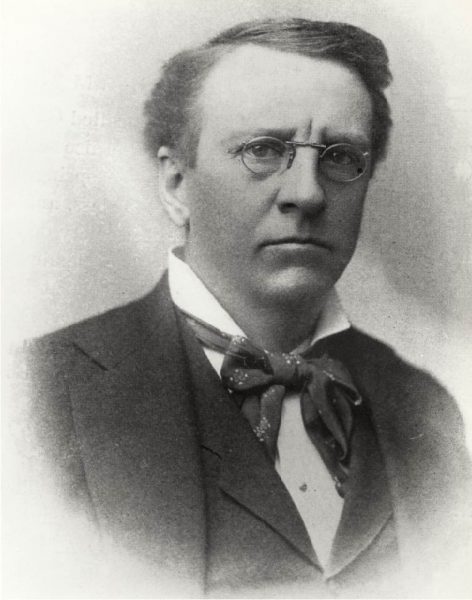 John C. Spooner, a native of Lawrenceburg, Indiana, received his Bachelor’s, Master’s, and law degrees from the University of Wisconsin-Madison. He was awarded honorary doctorates from Yale and Columbia Universities. At the age of 21, Spooner was a brevet major of the 40th Wisconsin Infantry and later became captain of the 50th Infantry. After the Civil War, he was appointed secretary to Governor Fairchild and quartermaster general for the State of Wisconsin. In 1869, after his completion of the bar, Spooner was appointed assistant attorney general for Wisconsin, but he left a year later and opened a law practice in Hudson. He was in charge of the legal interests of the West Wisconsin and North Wisconsin Railroads and general counsel for the Chicago, St. Paul/ Minneapolis, and Omaha Railway System. During this time, he was also a member of the Wisconsin State Assembly. In 1885, Spooner left his law practice in order to become a United States Senator. During his 16 years on the senate, he was a friend and advisor to Presidents McKinley and Roosevelt and was asked to serve as Secretary of the Interior and United States Attorney General, both of which he declined. He enjoyed a wide reputation as a senator and was considered on authority on international law. In 1892, Spooner was nominated as the Republican candidate for the governorship of Wisconsin, but he was defeated. Spooner was an excellent debater and speaker and served as the alumni orator for the commencement exercises of 1867. He sat on the University Of Wisconsin Board Of Regents for three years and was instrumental in helping to pass the act that gave the State of Wisconsin permanent responsibility for supporting the university.