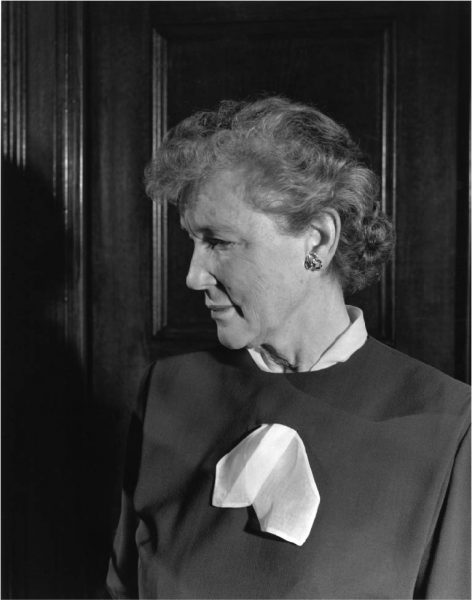 Louise Troxell, or “The Lady of Lathrop” as she was often called, was Dean of Women at the University of Wisconsin–Madison from 1931 to 1956. In her capacity as Dean, Troxell introduced a new concept in “deaning women.” She sought to be helpful to women and made her office open for advice, counsel, and economic aid. She also established occupational counseling and placement services for women and promoted women’s cooperative housing. Throughout her years as Dean, Troxell emphasized to Wisconsin women the lifetime value of a sound education. She is credited with vastly improving women’s housing conditions and initiating co-op residences at the University. She also personally helped women find employment during the Depression, and was said to be the forerunner of the campus placement offices. While serving as Dean of Women, Dean Troxell also held additional offices. She was a member of the U.S. Defense Advisory Committee for Women, and she served as the first vice president of the American Association of University Women, in addition to being the AAUW Education Committee Chairman from 1943-1949. She also was a delegate to the International Federation of University Women’s Conference in Toronto, Canada in 1947. During the Depression, Dean Troxell was instrumental in providing a milk dispensary, clothing exchange, and textbook lending library. During World War I, Troxell tutored and did volunteer work in Washington D.C. and was treasurer of the Washington branch of the American Association of University Women. The Louise Troxell Scholarship Fund gives an annual award to an outstanding woman student for exemplifying the standards Dean Troxell worked to maintain, including a commitment to academic achievement and service to the community.