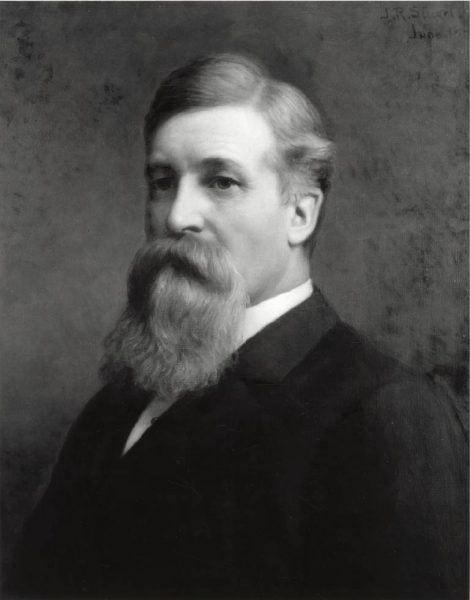 Thomas Chamberlin, a native of Matoon, Illinois, received his Bachelor of Arts degree from Beloit College and his Master of Arts and Doctor of Philosophy degrees from the University of Michigan. He earned an additional doctorate from the University of Wisconsin and received honorary doctorates form Wisconsin, Michigan, Illinois, and the University of Toronto. Chamberlin originally a professor of the sciences with a love for geology served as the University of Wisconsin – Madison president (1887-1892). During this time the student population doubled, the College of Engineering saw rapid growth, and funding for the sciences dramatically increased. Chamberlin founded the University extension, the summer school program, and established several graduate fellowships which greatly enhanced the graduate programs. He established the School of Economics and founded the first graduate program in Economics in the west. Chamberlin radically re-organized the university by dividing the existing departments into colleges and schools and hiring deans to serve as administrators. Chamberlin went on to head several geological surveys in Wisconsin, the United States, Greenland, and Switzerland and accompanied Peary on his Arctic expeditions. Chamberlin’s research on glaciers greatly contributed to our current understanding of glacial activity and serving as chief of the Glacial Division of the National Geological Service. Chamberlin is most noted for his theory of the formation of the Earth and the history of the atmosphere. He formulated a hypothesis of the origin of the solar system known as the Planetesimal Hypothesis, a leading geological hypothesis. Chamberlin wrote Origin of the Earth and Geology of Wisconsin, which were both widely received by the scientific community. During his time, he was ranked with Aristotle, Copernicus, Galileo, and Newton because of his vast contribution to the advancement of science.