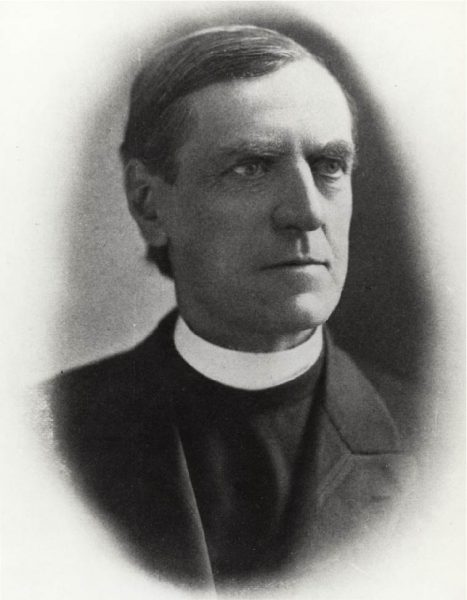 Samuel Fallows, a native of Pendleton, England, graduated valedictorian of the University of Wisconsin-Madison Class of 1859. He earned his Master of Arts degree from Wisconsin and his Doctor of Divinity from Lawrence University. He was later presented with honorary doctorates from Wisconsin and Marietta College. Fallows spent 16 years as a minister for the Methodist Episcopal Church before becoming bishop of the newly Reformed Episcopal Church. He was editor of an Episcopal publication and was appointed Chaplain-in-Chief of the Grand Army of the Republic. Fallows also served as chaplain of the Veteran Union League and the Loyal Legion of Illinois and is credited with dedicating the Grant Memorial in Washington, D.C. Fallows was a professor of natural sciences at Lawrence University, vice president of Galesville University, and president of Illinois Wesleyan University. He was elected to serve as the Wisconsin State Superintendent of Public Instruction three times and was also president of the Board of Managers of the Illinois State Reformatory. He chaired the General Education Committee of the World Congress Auxiliary and served as president of both the State of Illinois Commission for the International Celebration of the 50th Anniversary of Black Freedom and the University Association for the Promotion of Study Among the People. He wrote a number of books on literature and rhetoric, religion, and a biography of Samuel Adams. Fallows served on the Board of Regents of the University of Wisconsin for eight years. In 1864, he was elected vice president of the Wisconsin Alumni Association, and, in 1891, became its president. When Fallows was 85 years old, he dedicated the site of Memorial Union.