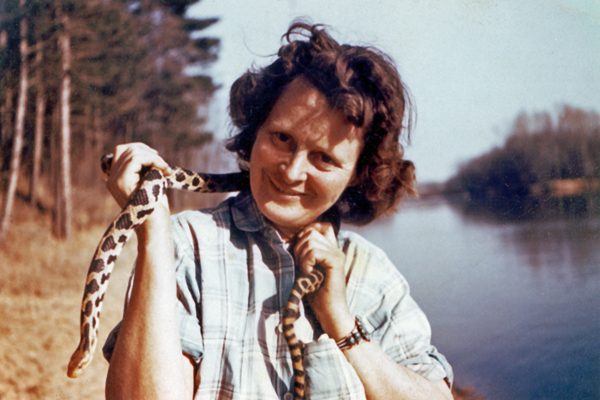 Hamerstrom was an author, conservationist and wildlife biologist. She is known for her study of prairie chickens and raptors, notably pinpointing the type of habitat needed by prairie chickens in order to maintain their presence in Wisconsin. Born Frances Flint in 1907 in Boston and she was interested in ornithology from a young age. However, her education got off to a rocky start. Frances did not graduate from high school and then flunked out of Smith College with three A’s and three F’s. Later, she settled down and fell in love with Frederick Hamerstrom and the two married in secret in Deland, Florida in 1931. Frederick and Frances soon began working together professionally at Iowa State in 1932, where Frances completed her undergraduate studies and Frederick was a research fellow. Additionally she went on to be the only woman to have earned a graduate degree under Aldo Leopold, a master’s earned in 1940 from the University of Wisconsin.  Together, they studied pheasant nesting, winter ecology of the bob-tailed quail and raptor food habits. Frances spent a large portion of her life teaching traditional and nontraditional students field ornithology and encouraging new ways of conducting fieldwork. As the Wisconsin Department of Natural Resources’ Assistant Project Leader of the Prairie Grouse Management Research Unit in Plainfield, WI, Frances was only the second woman ever employed as a wildlife professional in Wisconsin. She worked closely with birds throughout her life: she could sit in a freezing blind for hours; she could set the bone of an injured bird; she’d tuck young kestrels in her shirt while banding to keep them warm. Later in life, Frances kept a great horned owl at home, which was used for trapping harriers during her 25 year-long harrier study. The Hamerstroms’ research on prairie chickens provided tools for future ornithological studies. They were the first to color-mark prairie chickens using the falconers’ technique of imping feathers, which led to the discovery that cocks are territorial on booming grounds. Frances published at least 100 professional papers and about 100 reviews of ornithological literature. Frederick worked for the Wisconsin Department of Natural Resources from 1949-1972 as Project Leader of the Prairie Grouse Management Research Unit in Plainfield, WI and edited technical papers for several journals in addition to the books Frances wrote. He was also the Principal Referee for Raptor Research. Frances and her husband were heavily involved in many state, national, and international organizations. After their retirement, they continued their raptor research and continued to work in the environmental field by expressing concern for the needs of wildlife and population control.