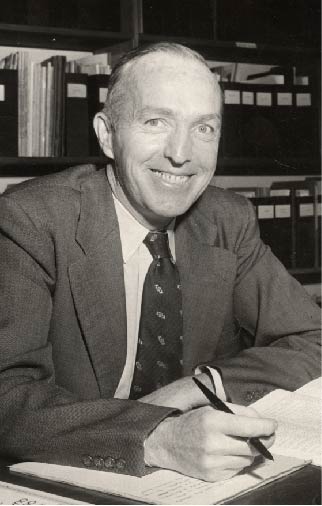 Joseph Hickey was an acclaimed ornithologist, researcher, and professor who contributed to the culture of conservation of Wisconsin. He began in New York City as a founding member of the Bronx County Bird Club during his teenage years. After meeting Ernst Mayr at a meeting of the Linnaean Society and being encouraged by Mayr to pursue a scientific study of birds, Hickey decided to change his area of study at New York University from history to biology. He met Aldo Leopold in 1941 and accepted an invitation to move to Wisconsin and continue his studies there. His master’s thesis, published as “A Guide to Bird Watching,” promoted the idea of the “citizen scientist,” and advocated counting, monitoring, and banding birds rather than just watching them. He pursued his Ph.D. at the University of Michigan, where he published “Survival Studies of Banded Birds,” which analyzed bird-banding data collected by the U.S. Fish and Wildlife Service. In 1947, Hickey was invited by Leopold to become a professor in the University of Wisconsin’s Department of Wildlife Management. Aldo Leopold unexpectedly died in 1948, and Professor Hickey was appointed to head of the department. Hickey helped publish posthumously Leopold’s “A Sand County Almanac,” which was published in 1949. At the University, Hickey loved teaching, mentoring, and fostering wildlife appreciation, giving wildlife ecology lectures that opened with tape-recorded bird sounds. Throughout his life, Hickey was interested in bird watching and conservation, particularly in Peregrine Falcons. From his initial study of these birds in 1941 to 1964, he noticed that all peregrine nesting sites had disappeared east of the Rocky Mountains. This led to Hickey’s most notable contribution to the conservation movement: his analysis of the connection between declines in bird populations and the effects of chlorinated hydrocarbon pesticides such as DDT. His research on the effects of DDT was pivotal to the eventual ban of the pesticide, first in Wisconsin, then in the United States. Throughout his career, he received dozens of prestigious awards including his favorite — the University of Wisconsin’s most prestigious teaching award, given to him at the end of his teaching career in 1976. Hickey’s influence is seen through thousands of students who benefited from his courses and advice. Bird populations have recovered in the post-pesticide era and are now protected by organizations such as the Audubon Society, Nature Conservancy, and Wildlife Society to which he devoted his life.