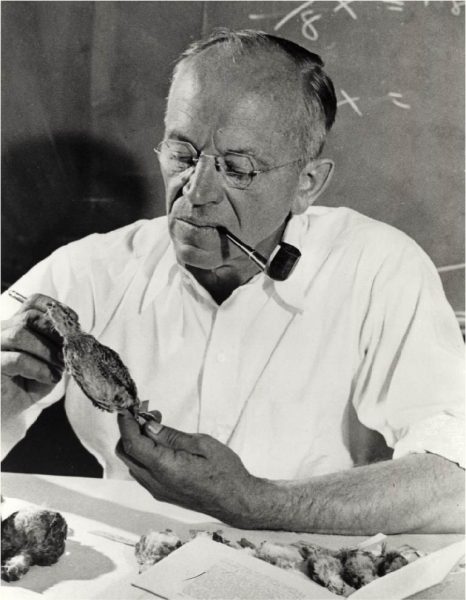 Aldo Leopold was nature’s scholar and in the natural order of our natural world, saw perpetual enrichment of our heritage. By this so humble yet so bold and novel approach, he pioneered a new science for the conservation of land and biological resources and in so doing, improved the birthright of all humanity.  Much of the thought and action which earned an enduring fame for the scientist belongs to his fifteen years on this campus. Wisconsin is more lustrous for that fact, the Yale-trained forester founded Wisconsin’s Department of Wildlife Management in 1933 and remained its chairman until his untimely death in 1948. Nearly a quarter century of field and administrative experience in the U.S. Forest Service and in wildlife research elsewhere was his to draw on as he piloted the Wisconsin department to distinction. The greater understanding which Professor Leopold found in such allied fields as land use, forestry, game management and wildlife ecology, directed always toward a conservation for the ages, brought into print some two hundred and seventy-five technical and popular works including an exquisitely written collection of nature essays. It also brought the world to his Wisconsin door: foreign, federal, and state agencies world to his Wisconsin door: to benefit from his counsel; an eager group of students who would emerge from his inspired teaching as brilliant ecologists. Around the globe these former pupils now practice the Leopold ethic, united in the warm shadow of a great logic within a greater poetry. Indeed all who hold reverence for the natural scene are united with this pioneering mind. Men are civilized, he declared, inasmuch as they shape the environment out of love and appreciation of nature. Without these sentiments, no truly sound conservation can be achieved. These walls find that civilizing influence in student fellowship. In the possession of a great name, they invite further aspirations for humanity.