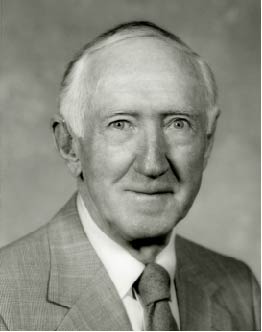 Robert A. McCabe was a specialist in the areas of wildlife ecology, farm game management and field techniques in wildlife. McCabe grew up on the south side of Milwaukee and after graduating from South Division High School, attended Carroll College for his undergraduate studies. After graduating in 1939 with a degree in biology, McCabe came to UW Madison where he tried to enroll in the zoology department, but after discovering he was interested in game conservation, department heads advised him to “Go see Leopold in Ag.” Although he gave up zoology, he heightened his interest in and dedication to conservation ethics, land health, wildlife ecology and ecosystem management in his graduate studies under Aldo Leopold. McCabe and Leopold had a close friendship and professional relationship until Leopold’s death in 1948. Leopold characterized McCabe as “one of the best and most versatile men that I know…has a warm and forceful personality, a phenomenal ability to get things done and an intellectual horizon that is wide and getting wider.” He received his Ph.D. in 1949 for his studies of ring-necked pheasants and became chairman of the Department of Wildlife Ecology in 1952; a position he held for 27 years. During his time as chairman, the department grew from 2 to 10 members and broadened in scope from game management to wildlife ecology. Committed to innovation throughout his career, McCabe sought to bring new technologies and techniques to understand ecological processes. Via his fabled wildlife techniques course he continued to teach field savvy to students well after curricula at other schools were confined to lab and lecture hall. He was among the first to use radio isotopes as markers under field conditions and infrared light to observe nocturnal behavior of animals. He pioneered the use of egg-white electrophoresis to test phylogenetic relationships–a basis for the concept of DNA/RNA affinities. This dedication to innovation led to his discovery of a technique to reveal evolutionary relationships between major groups of wild birds, which opened a new field of research of global significance in ornithology. His expertise was sought at the state, national, and international levels. Among his many assignments throughout his life, he was chairman of the Research Committee for the Wisconsin Department of Natural Resources, chairman of the National Academy of Sciences Subcommittee of Vertebrate Pests, consultant for the North American Waterfowl Research Foundation, member of the Secretary of the Interior’s committee on the use of lead versus steel shot, and consultant for the Department of Interior regarding the Exxon-Valdez oil spill. McCabe was known and recognized as one of the outstanding individuals in ecological research in the United States. In retirement he authored a book called Aldo Leopold and the Professor.