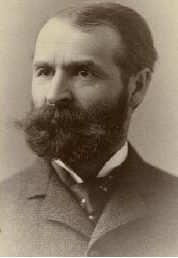 George H. Noyes was born in McLean, New York, and received his B.A. (1873) and law degree (1874) from the University of Wisconsin-Madison. While he was a student, he served as the assistant librarian for both the University of Wisconsin and the State. He practiced law in Milwaukee for 14 years after his graduation. During this time, he prepared the notes for volume iii of the Wisconsin Reports and served as general solicitor and secretary for the Chicago and Northwestern Railway Company. In 1887, he was appointed Superior Court Judge for Milwaukee and returned to his law practice three years later. He was active in the Wisconsin Alumni Association where he chaired a committee to study a plan to represent alumni on the Board of Regents. He was poet of the Alumni Association in 1875, vice president in 1884, and president in 1889. Noyes was a member of the University Of Wisconsin Board Of Regents for 12 years and at various times served as its president (1899-1901) and vice president (1897-1998). He was on the Board of Commissioners for the State Historical Society Library Building, president of the Wisconsin branch of the Sons of the American Revolution, and president of the Wisconsin Bar Association. In 1906, he became general counsel for the Northwestern Mutual Life Company and remained with the company until his death in 1916.